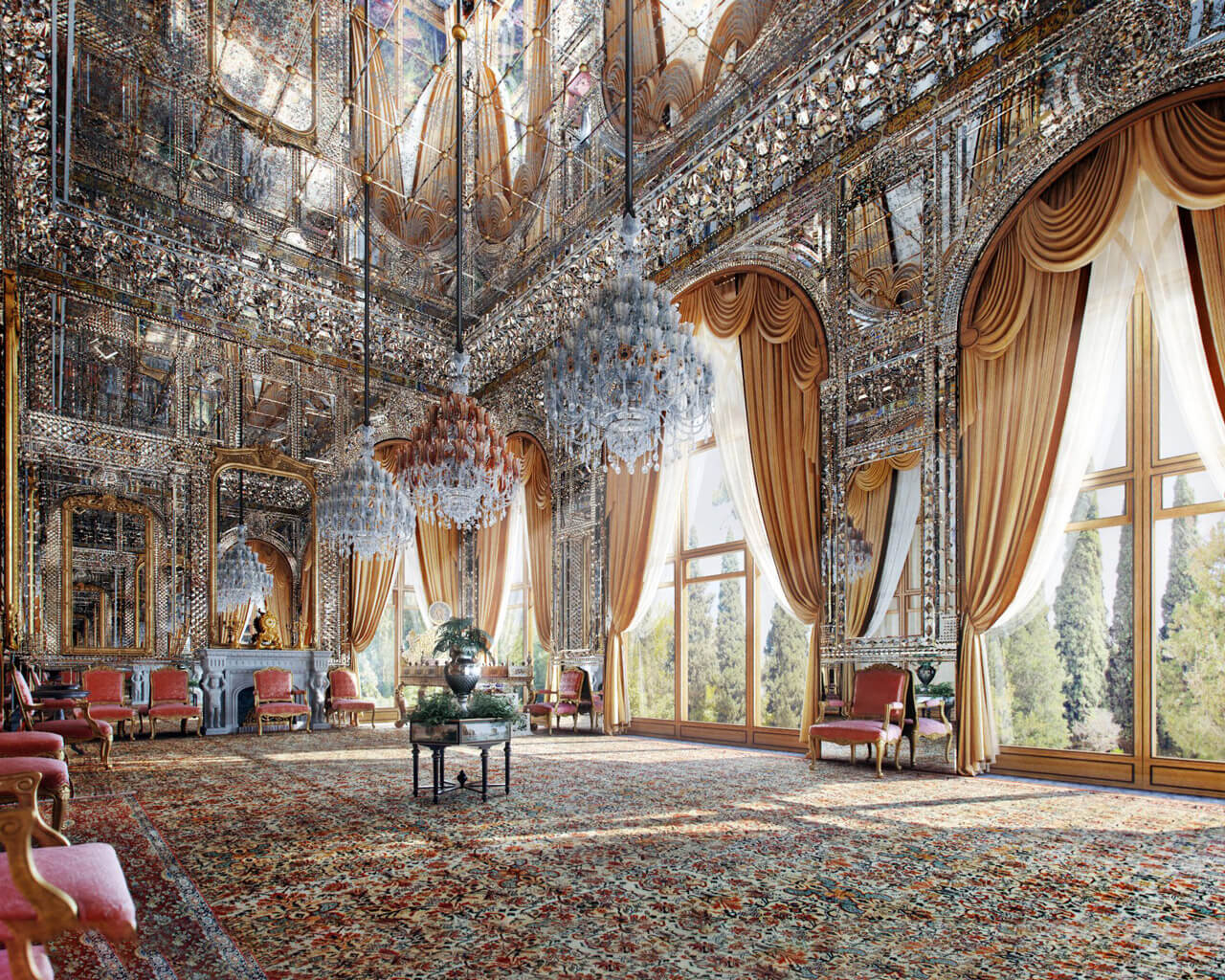 The complex of Golestan Palace consists of 17 structures, including palaces, museums, and halls. Almost this entire complex was built during the 200-year ruling of the Qajar kings which was registered in 2014 at UNESCO. This palace was built during Shah Tahmasb era in 1524-1576 and was renovated by Karim Khan Zand. As Aqa Mohammad Khan Qajar chose Tehran as the capital, these palaces were used for many different occasions such as coronations and other important celebrations. It also consists of three main archives, including the photographic archive, the library of manuscripts, and the archive of document. Golestan Palace complex consists of eight key palace structures mostly used as museums and gardens, a green shared center of the complex, surrounded by an outer wall with gates. The various section of the Golestan palace include: Eyvan-e-Takht marmar, Khalvat-e-Karimkhani, Talar-e-salam (Hall), Talar-e-Ayeneh (Hall), Tekie-e-dowlat, Talar-e-Berelian, Emarat-e-Khabgah, Kakh-e-Shamsolemareh, Emarat-e-Badgir, Talar-e-Almas, Kakh-e-Abyaz , Chadorkhaneh, Talar-e-Zoruf, Howz Khaneh and Museum Hall.

This eye catching throne is made of 65 pieces of Yazd yellow marble in different sizes in 1806 by Fath Ali Shah Qajar. It is beautify by paintings, marble-caving, mirrors, wood-carving. This throne is made by Mirza Baba Naqashbashi and is situated in the middle of the terrace. You will also have the opportunity to visit Talar-e-Aj, Which was used at the time of Naser- ed-Din- Shah for keeping the foreigners’ gifts. Coronation of Qajar kings and formal ceremonies were held on this terrace. And for your kindly information, the last coronation goes back to Reza Khan Pahlavi in 1925. 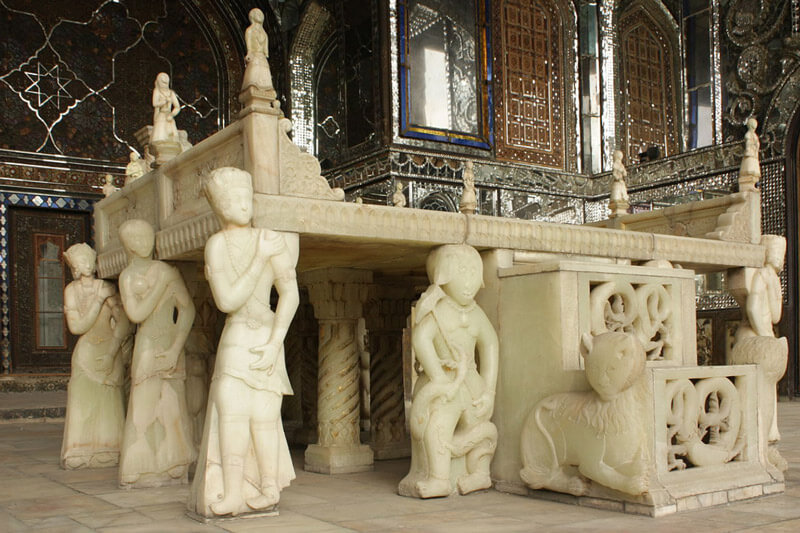 This Hall is located West of the reception hall and over the frontispiece and stone Eyvan in front of entrance hall of the palace. It is one the most famous hall of Golestan palace. It was built simultaneously with reception hall between 1874 and 1877. This Hall was made by Sannie-al-molk. The most important thing about this hall, refers to the famous painting of Kamal al molk in 1891, which you can see Naser al Din Shah in this painting. This painting is keeping in Golestan palace. 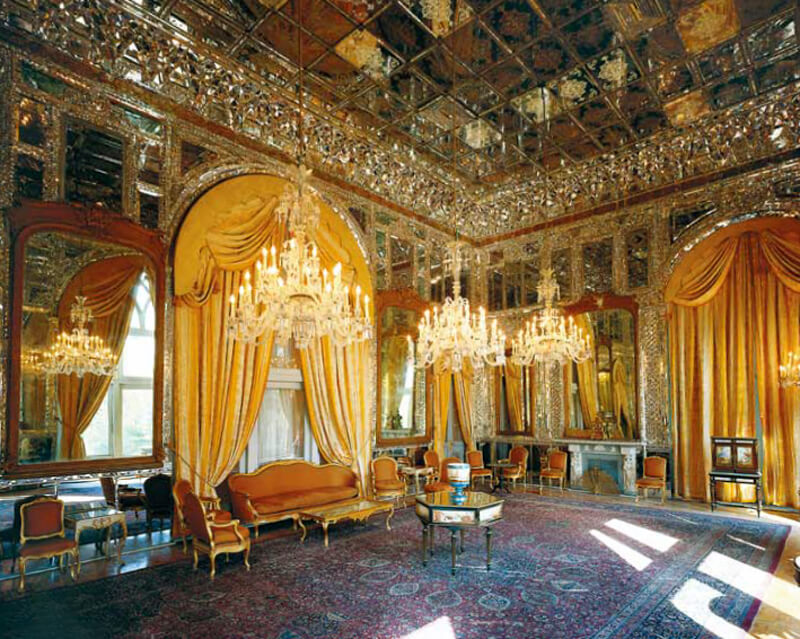 It is located in Northeastern of the Golestan palace and the date of construction goes back to 1759. This building was a part of the interior residence of Karim Khan Zand. It is similar to Takht-e-Maramr. There is building with columns like verandah. Naser alDn Shah used to sit there and smoked Sheesha and enjoy. His marble tombstone is located on the trrace. 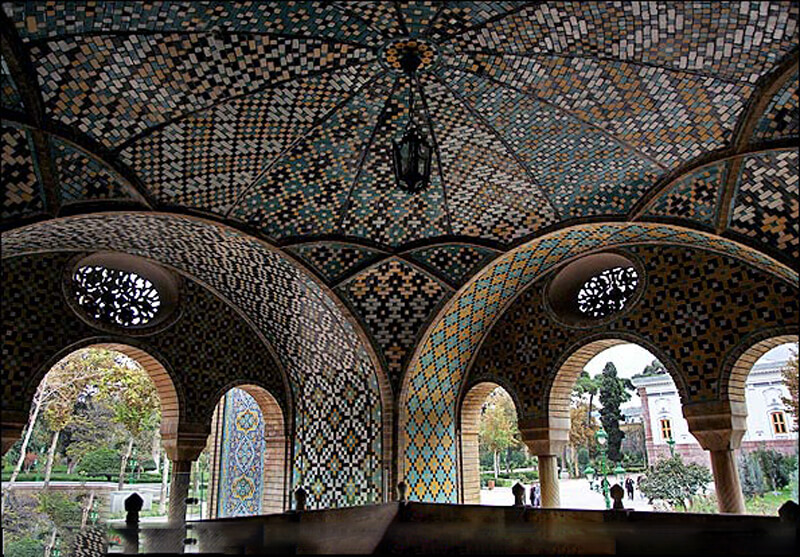 Talar-e-Salam or reception hall was originally designed as a museum. The construction of this hall goes back to the time of Fath ali Shah (1806). Naser alDin Shah renovated this hall, and changed its appearance. He commanded to design the wall with wallpaper which had been imported from Europe. The ceiling is decorated with plaster and the roof is covered with mosaic. It is placed in the southern of the Golestan palace next to the Badgir building.

Tekie-e-Dowlat is the largest building in the Golestan palace that was built in 1868-1873. It was destroyed by Reza Shah in 1946. There are 3 entrances to the building: First on the east side for men, West for ladies and the last and third was designed to welcome Shah which was connected to the palace main garden. Each floor has twenty rooms with 7.5 meters width for every single room. The building was used for Tae’zie (festival for Ashoora and ceremony of Islamic culture). 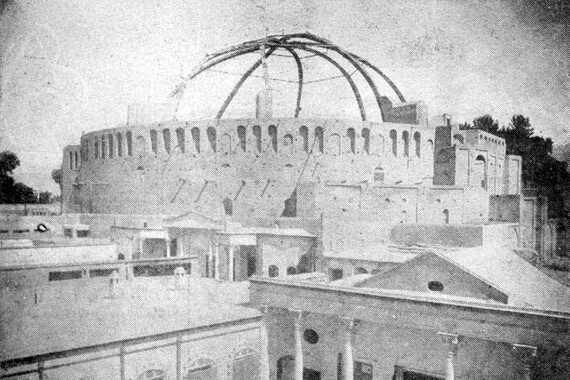 The Berelian hall is famous for the mirror work and the chandeliers. The floor of this hall is lower than those of the others. At time of Nase-Edin_Shah most of the old buildings were destroyed and renovated. During Pahlavi era, it was used for official meetings with foreign heads of states. An old painting by Yahya Khan Sanaee-ol-Molk Ghaffari shows the decoration of this hall before renovation and this painting exists in Golestan palace. 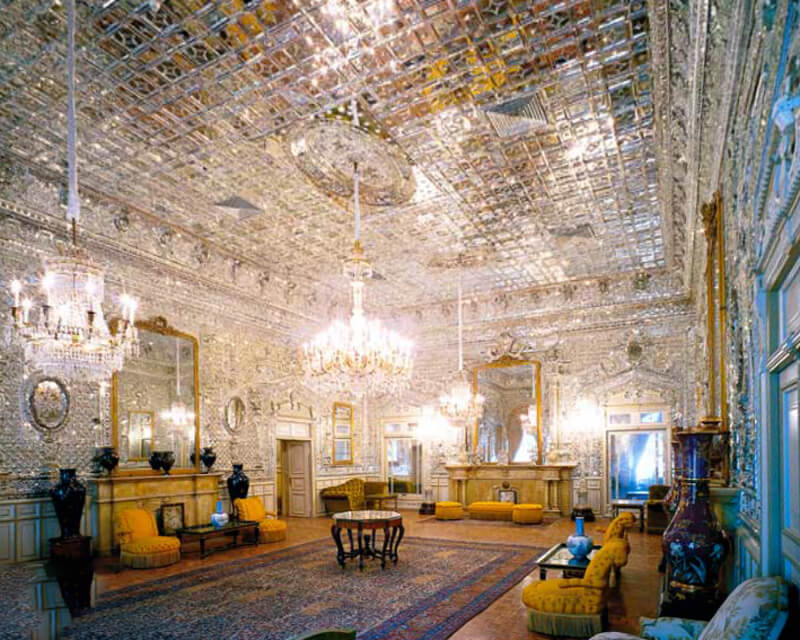 The dormitory is one of the newest constructions which were built for The Queen of United Kingdom of England Elizabeth II visit from Iran in 1339. It was the Kings and Presidents residential known as Dormitory afterwards for a while. The building is now scheduled to be devoted to the royal library of the Qajar era which carries the collection of the most precious textbooks.

Shams-ol-Emareh is the largest building in the Golestan palace which designed as a private residence for Moaayer-ol-Mamalek. This building was used as Shah’s observatory for Tehran’s landscape and its surrounding from balcony. It has the most amazing structure of the Golestan palace. Its construction began in 1865 and was completed in 1867. The architect was Mohammd Ali Kashani. This building has two similar towers. There are several rooms between the two towers with a third clock tower centered above them. The construction of this building is the combination of European and Persian style. 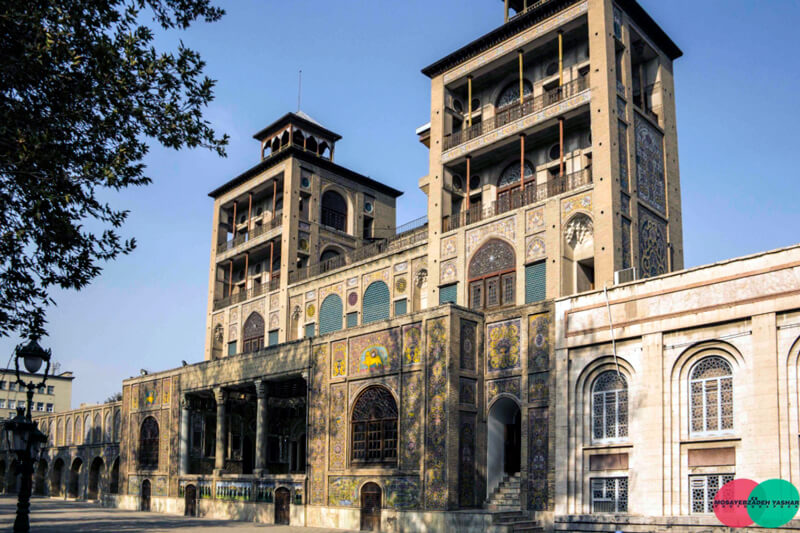 It is located in the southern place of Golestan garden. It was built during monarchy of Fath Ali Shah in 1813 and renovated by Nasre-aldin-Shah in 1853. There is a large summer chamber under this hall which consists of tall wind tower covered by yellow, blue, black tiles and golden dome. The walls and ceilings decorated by mirrors and beautiful tiles. A watercolor painting by Mahmoud Khan Malek –ol-Shoara describes the original structure of this building before renovation. 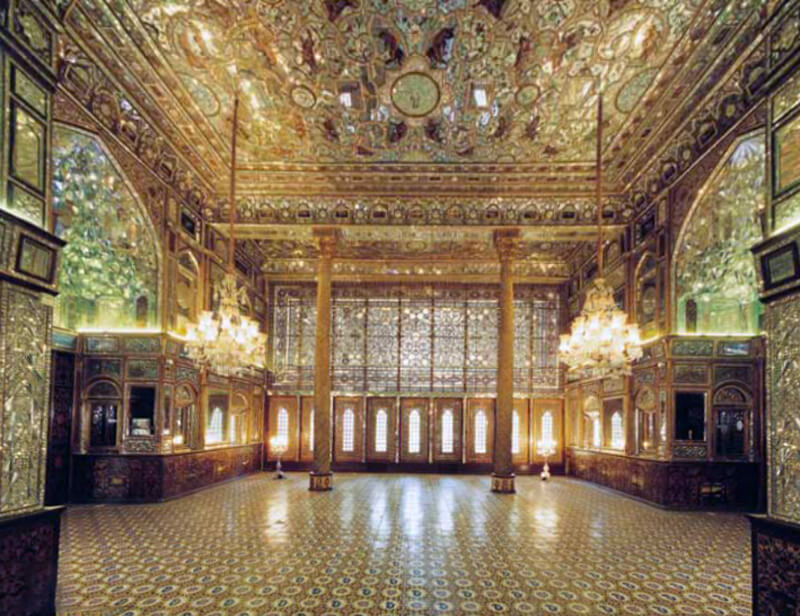 It is located in the southern place of Golestan palace, on the back of the Emarat-e- Badgir. It is called (Diamond Hall) because of shining mirrors reflection that used in this place. The construction of this place is turned to the Fath Ali Shah and rebuilt by Naser Aldin Shah. He has changed the appearance and decoration. Talar-e-Almas include a large hall, corridors, columns, slabs. The balcony covers three angles, the windows with colored glasses and long beautiful curtains.

In Naser-Din-Shah Kingdom, many gifts were sent to him from different kings all around the world and since there was not enough room for all these gifts, he decided to make a palace from marbles and stucco to move them there. The construction finished in 1883 and today it is open to people as ethnological museum. When you enter the Golestan palace, you can see this museum on your right hand. It is open every day except on Sundays and Thursdays from 9:00 to 15:30.

It is located between Talar-e-Amas and Emarat-e-Badgir. It was used as a warehouse for royal tents. The Qajar kings were used to go to the outdoor trip, which carried the royal tents by the attendants, was a necessity. Many tents were needed to accommodate the entourage. Thus, a need for a House of Tents was felt. Now, many of these tents are using for official meetings and lectures.

There is a hall in the north of Golestan palace which can be considered as a separate part of this magnificent gardens palace. A hall locating in northern part of Golestan palace can be valued as split part of glorious construction. From east Emarat-e-Khabgah, South Talar-e-Brelian and West the main hall meet Talar-e-Zoruf. All the valuable dishes that were presented to the Qajar kings by the several European kings were taken to this chamber and were arranged in show cases which were built for this purpose. The dishes are unique and precious. We can also find some exclusive dishes there like:  The Chinaware donations of Napoleon Bonaparte to Fath Ali Shah Qajar, The dishes donations of the First Nicholas of the Russian Empire, The handicraft of the Malachite stone, the donation of Alexander III the emperor of Russia, the dishes donations of the Queen Victorian and Micro mosaic boards by Gallant referred to Ganjineh Museum and Talar-e-Salam that moved to this place. 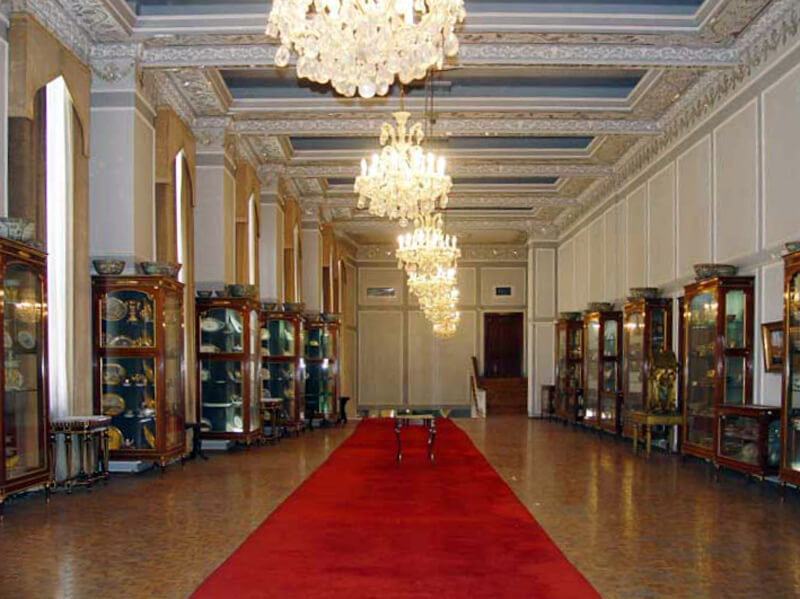 After Naser Eldin Shah returned back from Europe, He commanded to build Howz Khaneh on the basement of three buildings which includes Talar-e Aj, Talar-e-Berelian and Museum Hall. Howz means pond, they built ponds for the special cooling system which pumped required water from subterranean of stream into small ponds inside the chambers. The system was designed to pass through as many summer rooms as needed. The water was then channeled outside to irrigate the royal gardens.  Due to the harmful effects of humidity, this system is no longer in use.

This place, where courtiers used to rest, was used at the time of Pahlavi II for ceremonies and religious festivals. The interior design of this place goes back to Qajar era and it is the combination of Persian and European arts. Howz Khaneh was opened as a gallery of European painting in 1997, but in 1998, small pond was added in the style of old basin. 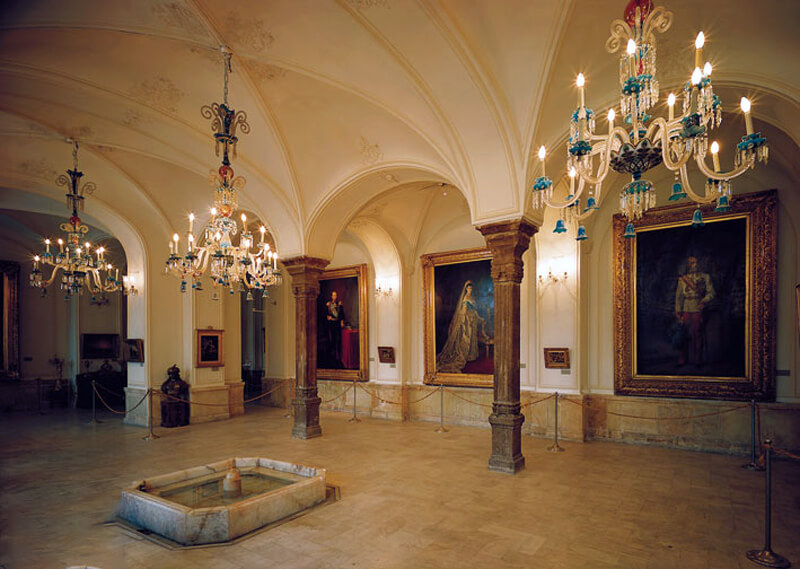 Negar Khaneh is the gallery of paintings which placed in the lower floor of the Talar-e- Salam and has been dedicated to presenting the works of Iranian artists during the Qajar era, plus Kamal al-Molk works. 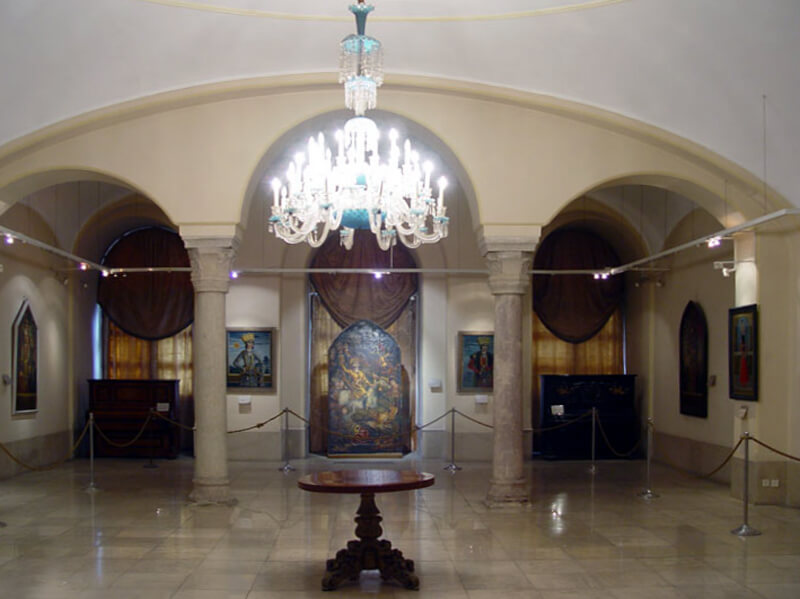 This building is located under the Talar-e-Salam that used as a warehouse for the precious things. In Pahlavi period, this warehouse was turned in to a museum to display the rare gifts, which was given to Qajar kings. Followings are the examples to these gifts:

Golestan Palace represents a unique and rich evidence of the architectural language and decorative art during the Qajar era mostly shown in the legacy of Naser- ed-Din- Shah. Golestan palace has witnessed some important moments in Iran’s history such as constitutional revolution, the coronation of first and second Pahlavi dynasties.

It can be easily caught while you are in Tehran by public transportation like taxis buses or subway. The station of subway for the Golestan Palace Museum is called Panzdaeh Khordad. 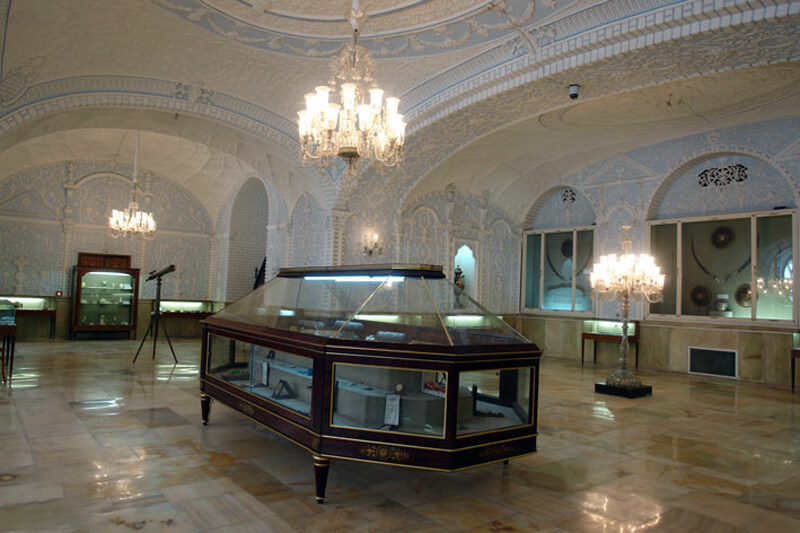